My name’s Ryland and this is my 2004 Toyota Tacoma Prerunner. Growing up in Bullhead City, AZ I had built a passion for Off-Road Racing after attending several SCORE Laughlin Desert Challenge events across the river in Laughlin, Nevada and watching off-road videos. In November of 2004, I purchased a 2004 Toyota Tacoma 4x4 5-speed manual with 2,000 miles for the purpose of having a reliable vehicle when I moved to Flagstaff, Arizona for college to study Mechanical Engineering, but I always knew I would eventually build it into a prerunner. My best friend Nick, had an 04’ Tacoma with some Camburg long-travel, Deaver springs in the back, and this was really the only prerunner I had spent any time in.

During my freshman year at NAU, I got a job at a shop that specializes in leaf spring repair as well as lift kit and after-market accessory installs with a little custom fabrication. After my freshman year, I decided I wanted to start taking the truck to the next level. I took the stock control arms from Nick’s truck and started mocking up my own LT kit. Spending hours reading forums and asking questions from anyone I could, I was able to build a pretty decent front end that would stay on the truck for about 8 years.

After the front end was finished, I met Joe Murphy, (a local guy that had been in the off-road industry for years) and offered to let me take the truck to his shop to work on the rear. I built a set of leaf springs at the spring shop that would later get traded for a set of Deaver F55s and combined them with a set of Total Chaos 12” shackles and built a bed cage for the Sway-A-Way 16” piggyback shocks. With the rear done, we spent a lot of time tuning the shocks at the Cinder Pits in Flagstaff getting the truck faster and faster.

With a faster truck I decided it was time to build a roll-cage. Since this was my daily driver I wanted to keep the full interior and decided to just run a B and C-Pillar tied into the bed cage. This is how the truck stayed for quite a few years. Nick and I would travel to Barstow and Lucerne Valley, CA for the MDR races with the hopes of building our trucks into race capable vehicles but being a college student this was a bit out of my budget.

Fast forward to 2014, I am living in Ann Arbor, Michigan after landing a job with Fiat Chrysler Automobiles as a Powertrain Development Engineer/ Transmission Calibrator. The truck had been neglected a bit, I wasn’t daily driving it anymore and it needed quite a bit of work to get it ready for dirt again, but with nowhere to take it (that I was aware of) the motivation wasn’t quite there. Then one day I get a message from Tyson Ahrens saying he saw my truck driving down the highway and wanted to meet up. Tyson had a 1993 Ford Ranger that was built by Camburg a long time ago and told me they had sand dunes on the westside of Michigan, Silver Lake Sand Dunes. I had never been to Glamis Sand Dunes in CA, but had always heard awesome stories, so I knew it was time to get the truck back into shape and see what I was missing.

Tyson had organized a “Silver Lake Prerunner Invasion” and told me I had (4) months to get the truck ready, oh and the Dirt Alliance would be there filming! The list included new motor mounts, all new bushings, uniballs and heims in the suspension components, hydraulic bump stops on all four corners, a 32 gallon Jaz Jeepspeed fuel cell and finishing the roll cage. Working on the truck until the last minute (as usual) with the help of some friends we were able to make it out and all I can say is “What an experience!” Silver Lake is relatively small compared to Glamis but the off-road community was nothing I had experienced before.

Everyone was really friendly and I immediately felt part of the “club”. Trucks ranged from full built prerunners to Jeeps all the way to stock vehicles, but everyone was out there for the same reason…to do what we all love. I was able to meet James from the Dirt Alliance and hear what he was doing to bring the company back into the industry, including a new video “Revival”. DA has always represented guys like me who wanted to build a truck in their garage so they could go out and thrash it on the weekends and are continuing to do so while expanding into other areas of the after-market automotive scene, and the opportunity to film with these guys was an amazing experience.

At the end of the season I was told Cory from Perplexed Media would be coming out to get some more footage for the video so we packed up the truck and headed out. I may have gotten a little excited and was going a little too big off of one of the dunes and ended up twisting the front frame rails. The front end I had built had survived a ton of abuse but the 12” of travel using 4x4 just wasn’t enough and with 6 months of off-season ahead of me, I knew it was time to upgrade the front end.

I got a hold of Tommy Trego from TT Motorsports out of Simi Valley, CA and talked to him about building a front end. Tommy and Mike James had been working on a kit that was currently on both of their Tacomas that was exactly what I needed. The kit included new upper and lower control arms, eliminating the stock coil bucket and upper arm mount and moving the mounts to the top of the frame, a fully fabricated upright and heimed steering. The kit utilizes upgraded Toyota Solid Axle spindles and hubs, 1” uniballs on the upper arm and 1.5” uniballs on the lower arm. The kit cycles 17” of wheel travel bumped and strapped and is matched with a 2.5” x 10” Coilover and Bypass. Tommy was there to answer all of my questions and was extremely helpful throughout the whole install process.

With the kit I built an engine cage that tied into the cab along with a new CBR Race Radiator to keep the engine running cool. The first season with the new front end was eventful to say the least. The first trip on the new front end was night and day different from the previous year; I was able to go through sections 10-20 MPH faster than I was before!

But with faster speeds, weak links in the truck started to show up more and more. I smoked the clutch after the first weekend so I contacted the guys at LC Engineering to find out my best option. I had already been running their Dual Friction Clutch and was extremely happy with it, but I had intentions on running larger tires and adding power, so I stepped up to their Metallic Clutch kit and added their 38LB flywheel to help the stock 3.4L on the bottom end, and what a difference it made! I was able to shift into 3rd without bogging down and picked up even more speed but again the weak link showed its head and we broke the rear axle housing.

I was able to find a T-100 axle locally that had a 5:29 gear set and was already tabbed for SUA leafs as well as a 3-link so I picked that up and headed out for another weekend but being an open differential, I destroyed the spider gears after about 45 minutes into the first day. Pulled the differential and welded the gears but it was not able to survive the weekend so we packed up and headed home. Upgraded the differential with a TRD limited slip and was running great the next trip out but I found the weak link of the R150F transmission was third gear and ended another weekend short.

Wanting to get in one more trip before the end of the season I picked up a junkyard trans, slapped it in and we were off for the last trip of the year. The dunes were the best they had been all year and we found a big table top to catch some air on. After being unable to clear the landing, we took some pretty hard hits and on the drive home, my girlfriend Shelly/ co-pilot and I decided it was time for more upgrades to make things smoother. So once again, I hit up Tommy about a 4-link kit he and Mike had been working on, and thanks to an amazing offer he gave me, we were able to get a kit built and shipped out.

The kit includes 49” lower links with bushing pivot fronts and 1 ¼” heims at the axle, upper links pivoting on 1” heims, upper and lower link mounts for the frame as well as upper and lower mounts for the axle. When the package showed up, I was amazed at the quality of the parts to say the least, and recommended that anyone looking to upgrade their off-road vehicle to check out TT-Motorsports.com and give Tommy a call. I finished the back half in order to have the truck ready for the 2017 Silver Lake Prerunner Invasion May 13 at Silver Lake Sand Dunes in Michigan. The rear suspension is equipped with a 2.5” x 14” Coilover and a 2.5” x 16” Secondary shock, with 2.0” hydraulic bump stops pulling around 26” of rear wheel travel.

The bed cage includes a storage box under the dual spare tires to hold spare parts, fluids and tools with a flip up lid that holds the spare tires. The goal for this year was to get the truck dialed in with the new suspension setups front and rear. I was able to make some significant improvements and the truck continues to get faster. This winter the plan is to focus on smaller upgrades and giving the truck a solid prep for next season. Bigger changes in the future will include adding power, because who doesn’t love more power! Whether it be modifying the current 3.4L or doing an engine swap, I would like to keep a Toyota power plant under the hood.

I want to thank companies like LC Engineering and TT-Motorsports for providing top quality parts and excellent customer service throughout the process of building my truck and the Dirt Alliance for letting me be a part of their “Revival”. I look forward to what the upcoming season brings and working with these great companies to build the truck of my dreams. If you ever see me driving around please stop and say hello, I always enjoy meeting new people that share the same passion for off-roading as I do. 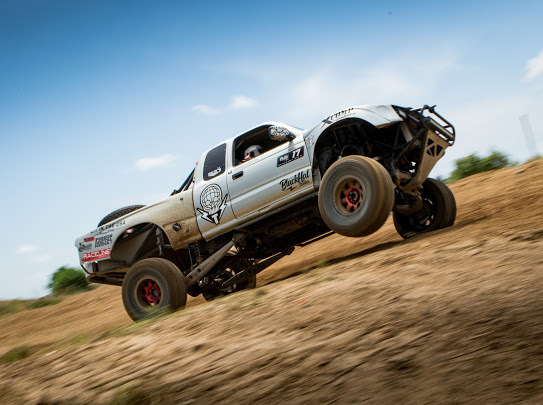 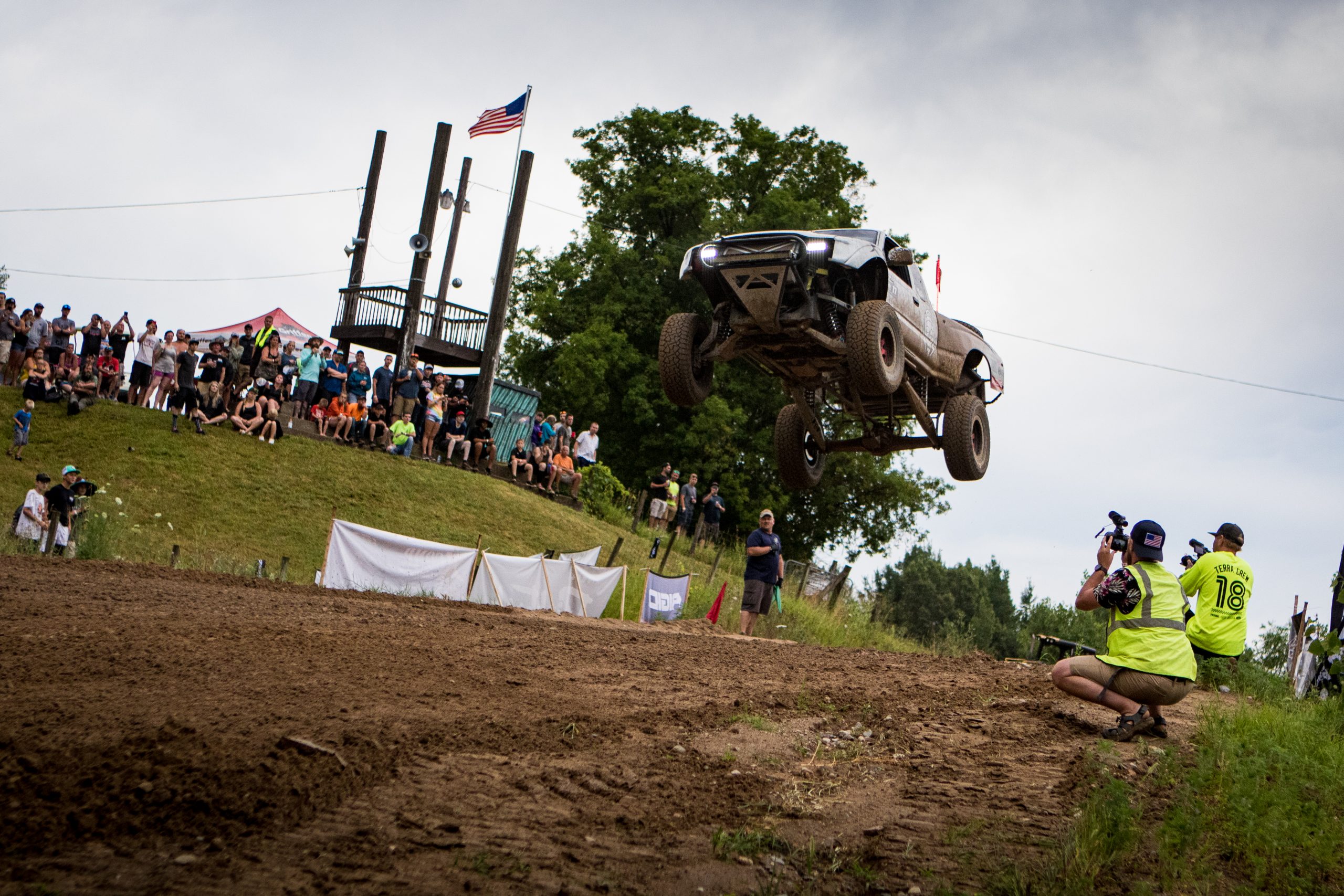 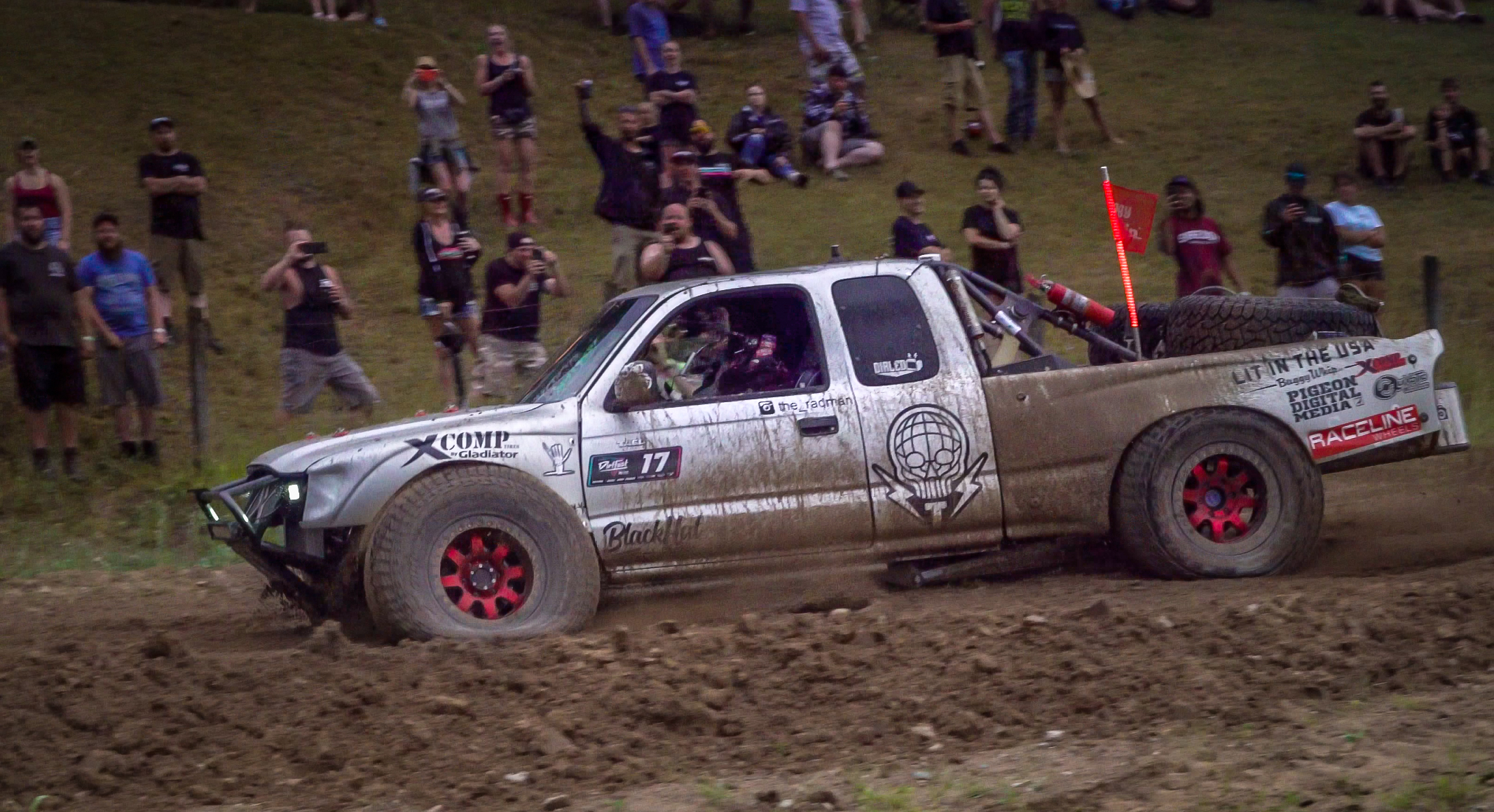 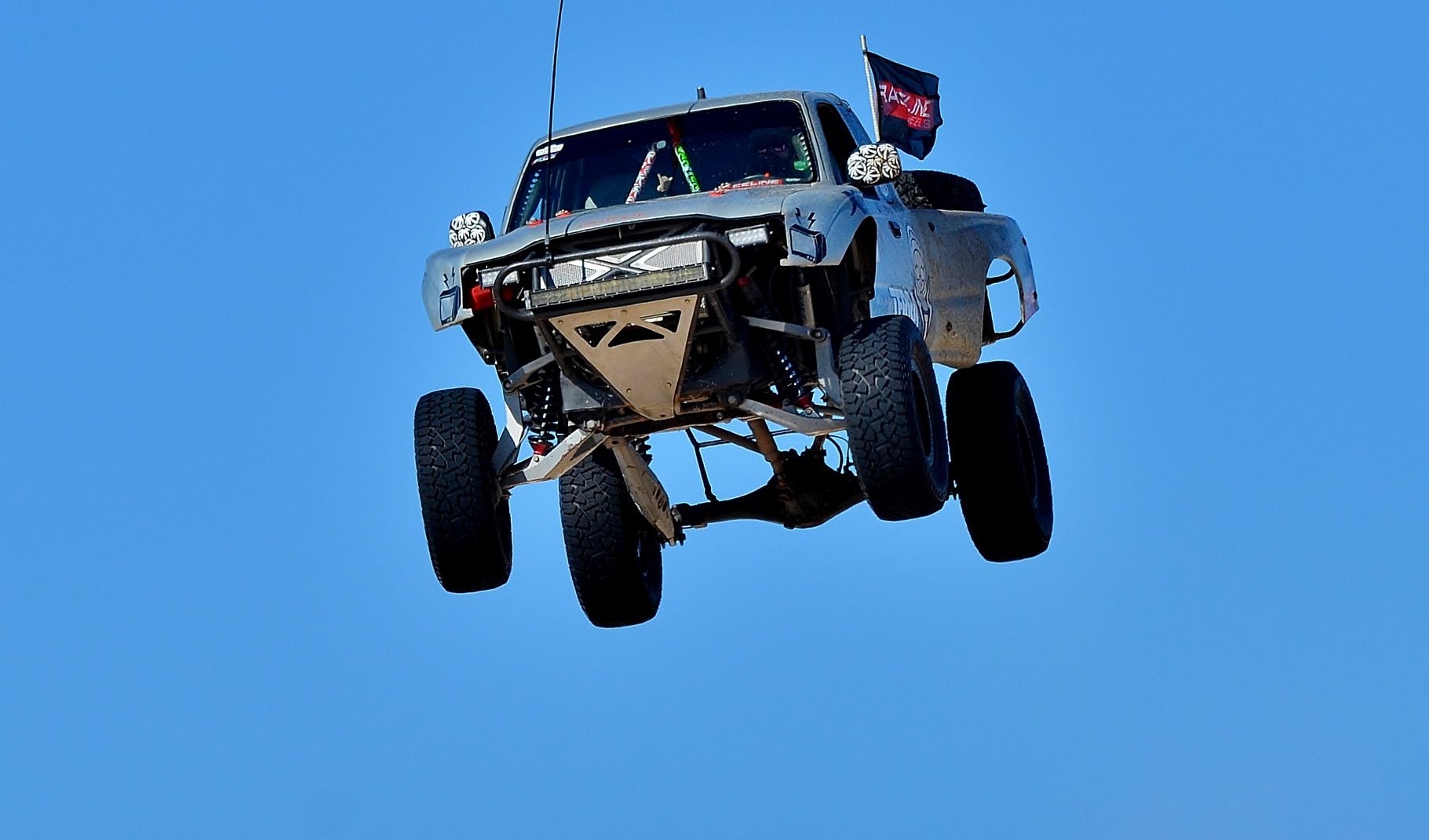