This is a much debated topic, but mostly among those selling what can only be described as a "Similar" carburetor. The “Similar” carburetors are easily distinguished from the European Weber by several characteristics: 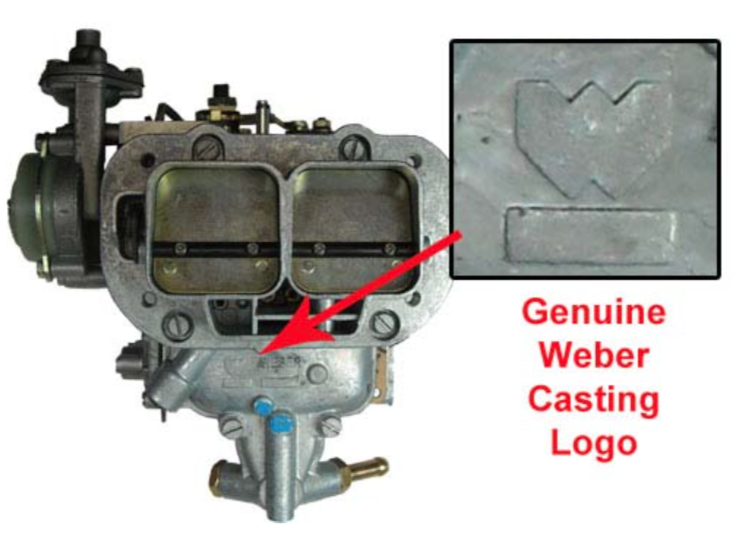 We hope to clear some confusion by different merchants claiming they are selling Genuine Weber carburetors. How does a consumer discern what Genuine really means?

The founder of WEBER carburetors was Eduardo Weber. The WEBER carburetor company as we know it started in 1935 in Bologna, Italy. They produced carburetors there till 1992 when production was moved to Spain. When we think of WEBER carburetors this is the company that we refer to. The “WEBER” name is currently owned by Magneti Marelli of Italy. This international company owns many other brands – the most interesting of which is SOLEX. The Solex carburetors were a major competitor to WEBER for almost 60 years – and today they are owned by the same parent company. Magneti Marelli licenses the use of the “WEBER” name to many entities worldwide. Licensing in some cases means they can use the WEBER name and the WEBER mark to brand a product that otherwise would not be recognized as a WEBER.

Car manufacturers regularly brand products. GM produces a car in Europe (Opel) in a plant that GM owns – brings it to the states and sells it as a Cadillac Cetera. Does that mean it is a Cadillac? Ford jointly builds a car with Mazda (626 and Probe) with primarily Mazda drive train – does that make it a Ford? This policy is called “combination branding” when one parent company places the same brand on products that compete in the market place – i.e. Pontiac, Oldsmobile, Saturn, Cadillac, etc. all sold as GM. In the case of GM they needed a nice midsized vehicle and the Opel was easy to brand a Cadillac. GM did sell cars in the US under the OPEL name plate for years, but stopped when sales did not meet expectations. Was GM hiding something from the public if they did not disclose that the Cadillac they were buying was really an Opel? This is the problem with branding (licensing) a product – the consumer may be buying something they believe is one brand – when in fact it is made, designed, and or engineered by a different company. Both companies can be owned by the same parent company – but are they the same?

That is the situation with WEBER carburetors today. Certain companies have no affiliation (other than maintaining licensing and manufacturing agreements with Magneti Marelli) with the Italian designed and Spanish built Weber carburetors. But this licensing agreement means that a specific company can legally use the Weber name. Continuing that line of reasoning they claim they are “genuine” and they may in fact be – legally. But are they “Genuine”? In our opinion “Genuine” infers two things – that it is real and original. There is only one original Weber and that is the European produced, Italian designed, carburetor built in Spain. These carburetors were originally designed and engineered by the Weber Carburetor company in Italy. Consumers should be aware that what this company is doing is importing a Solex designed carburetor from South America – branding it a Weber – and calling it a “Genuine” Weber. They reason that if Magneti Marelli owns the Solex factory then it can legally be called a “genuine” Weber. We will leave it up to the reader to decide for themselves whether they believe this is what a person would believe to mean “Genuine” (legally it says so).

Now this company has taken it a step further (as of the Summer of 2011) and is now supplying the 32/36 DGV series and the 38 DGS series carburetors and branding them as Weber's just as they did with the Solex Carb's from South America. Below is a detail list of the models in question.

How to Spot The "Similar" Carburetors:

The following image shows the difference in the "Similar" vs. the Original European WEBER 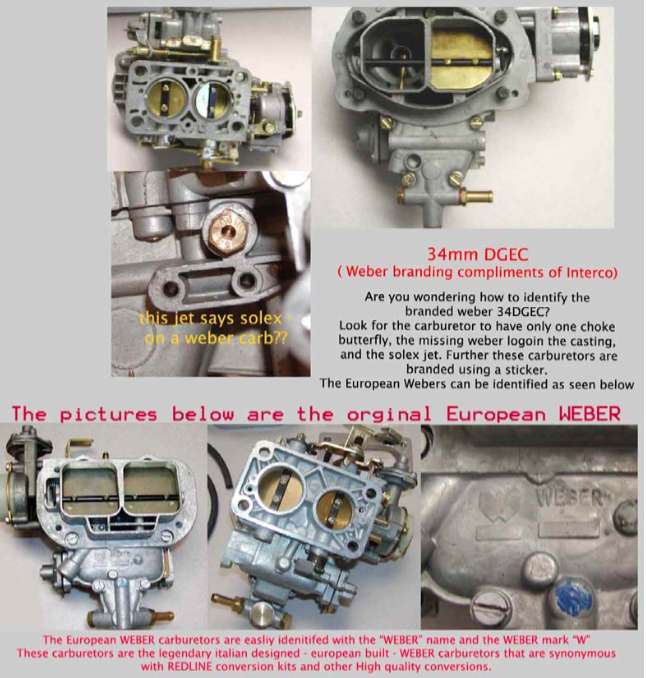 This goes to show you the issue is not isolated to just the North American Market - these "similar" carbs are being sold worldwide.

In the end what does this all mean to the consumer. First you must understand what you are buying and why. The choices are: The Original Italian designed and European Built WEBER or the carburetors that are "Similar" from other places with the “cheaper” price. Up until 2001 Weber carburetor conversions all utilitized the European Carburetors. While there where competitors, there was one undisputed leader - Weber of Italy. That has all changed with the Parent company Magneti Marelli now owning one of the oldest carburetor names in the business, and a former competitor, Solex. It is interesting to note that at Magneti Marelli's website the founding of the Weber carburetor was to eliminate having to buy carburetors from the French Solex carburetor company. While legally Magneti Marelli can allow branding - they seemly would allow these businesses to take a frozen dinner and call it a Weber this certainly that calls into question the whole concept of branding.

So - when you buy - do you want the original? The WEBER carburetor that is legendary in its performance. A proven carburetor with a track record extending over 30 years. The Italian designed carburetor that was, and is, the benchmark by which all 2bbl carburetors are measured. Built in Europe to the same exacting standards that only the original European Weber carburetors can deliver on. Or - do you want a branded or "Similar" carb (usually without knowing your aren't getting the original European Weber). The choice is simple. Be sure it says REDLINE to assure you that your "genuine" European WEBER carburetor is tuned and jetted for the absolute best value your money can buy. REDLINE's use of the European WEBERS assures the consumer they are receiving the same high quality genuine WEBER carburetor that has gone into the conversion kits for over 30 years. Time and race proven - there is really only one "genuine" Weber carburetor - the Legendary European designed and built WEBER (made in Spain).

If it sound too good to be true, it probably is.