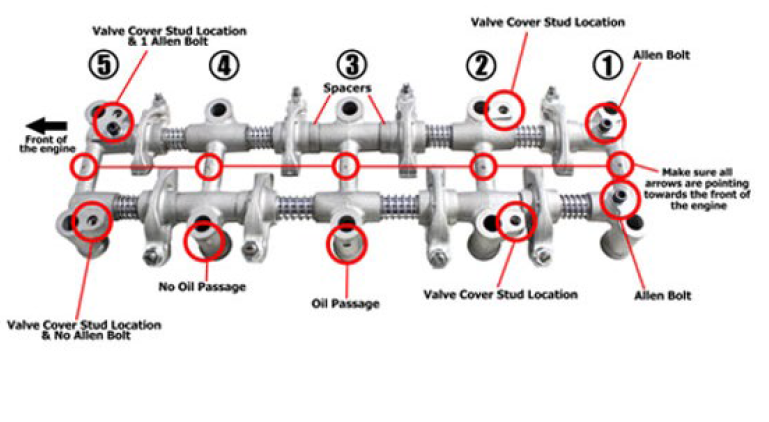 The rocker arm of an internal combustion engine changes radial movement into linear movement. This kind of device is properly called a reciprocating lever. It takes the spinning motion of the overhead camshaft and turns it into the upand- down movement that opens and closes the valves. Toyota rocker arms utilize an aluminum body with a steel pad so they have a great deal of strength for their weight, and can therefore exert a great deal of leverage. After many attempts, LCE has found that the trusty OEM Toyota rocker arms are still the best on the market today. Their lightweight, durable design allows for excellent performance as well as longevity. They also have a better nose design to allow for ample clearance on big lift applications. You may also hear about a rocker arms “ratio”. The ratio is a measure of the arm’s leverage, which in turn determines how powerful the force is that it can transfer to the valve stem.

The ratio is determined by the length of the arm, both between its center of rotation and the point it contacts the cam lobe, and between its center of rotation and the top of the valve stem. A Toyota rocker arm has a 1.457:1 ratio, meaning that it moves the valve almost one and a half times further than the peak of the cam lobe projects up from the camshaft, which is ideal on these 22R/RE/RET applications. We use these on everything from stock rebuilds to full race engines. LCE recommends replacing all rocker arms whenever you install a new cam so you do not damage your new camshaft. We are aware that these can be a pricey item to purchase and are aware that the “other guys” are offering resurfaced/reground arms claiming to be acceptable. Take extreme caution on the resurfaced/reground rockers in the market, regrinding the pad on the rocker can remove the heat-treated portion of the pad making for a soft rocker. Rocker arms that are reground will not have the factory geometry of a stock rocker. To regrind a rocker will take care of the face surface but will do nothing to address the rocker shaft bore, a loose rocker bore will make adjustment difficult and will never be correct. Don’t skimp on the parts that matter, you are not just buying a part but an insurance policy!