General Info:
A supercharged engine when operating under boost, that is, with positive manifold pressure, will experience higher combustion pressures than a normally aspirated engine. The effect is quite similar to raising the compression ratio. The major difference is that a high compression engine experiences increased loads on pistons rings, and bearings whenever the engine is operating, while a low compression ratio supercharged engine encounters higher pressures only when under boost. Most modern engines can withstand these increased pressures if proper consideration is given to fuel octane quality. As with any high compression engine, supercharged engines require the highest octane fuel available to minimize any tendency towards destructive detonation.

Camden Superchargers recommend that boost be limited to 6 PSI on an engine having a compression ratio of 8.5:1 when running on premium unleaded fuel of 92 octane. If your engine has a lower compression ratio, it is possible to increase the boost. Conversely, if your compression ratio is greater than 8.5:1, it will be necessary to reduce manifold pressure to prevent detonation. If it is impractical to reduce the compression ratio of your engine to 8.5:1 or lower and you still want the performance gains associated with 6 PSI boost, there are some options. First of all, you could use higher octane fuel if it is available. As an alternative, octane boosting additives are available, but their cost may make them unattractive for everyday use. Boost retard systems are available, which automatically retard ignition timing as manifold pressure rises. The major objection to these devices is as you retard timing you lose power. The rationale appears to be it is better to lose a little power under boost than to destroy an engine under detonation.

Another alternative which works well on borderline knocking engines is water injection A system which increases the volume of water introduced as boost increases is commercially available and has proven to be quite effective in controlling detonation; however, just do not run out of water when you are under full boost. Fuel mixture is extremely critical when operating under full boost as a lean mixture can lead to detonation. A boost enrichment system can be added to provide a slightly richer mixture under full throttle, max boost operation. The cooling effect of a rich mixture can prevent detonation under wide open throttle, full power conditions. If managed property, the slight loss of power due to excessive richness will hardly be noticed. A supercharged stock engine does not need to be “revved” as high as an un-blown engine to achieve superior performance. High engine RPM’s put extra strain on reciprocating parts and should be avoided if maximum engine durability is to be achieved. The superior low and mid-range torque of a supercharged engine can be used to advantage by shifting sooner and avoiding the wear and loads caused by high RPM.

This Camden Supercharger System has been designed for use on engines ranging from 90 CI to 460 CI. Compression ratios should not exceed 8.5:1 for use with a standard blower kit producing 6 PSI at wide open throttle. With the use of premium unleaded fuel, safe engine operation can be expected throughout the normal operating speed range. Horsepower and torque increases of at least 30% should be observed. The Toyota supercharger carburetor adapter will accept a Weber 2 barrel carburetor bolt pattern. As a supercharged engine can flow more total air volume than a stock engine, Camden recommends a minimum of a 350 CFM carburetor. Remember also that a carburetor that is too large can be harmful to low end response. The Camden Supercharger kit is designed to be installed on carbureted 22R engine pickup trucks with or without low mount air conditioning and power steering. No internal engine modifications or alterations to the engine compartment sheet metal are required. The kit can also be used on passenger car applications Passenger car applications require the purchase of an additional offset carburetor adapter.

NOTE: Before installing the supercharger, you should verify that your engine is in good mechanical condition. A compression test or lead-down test should be performed to check on valve and piston ring sealing. A supercharger should not be installed on an engine that is in poor condition or that has low oil pressure. This kit is not legal except on racing vehicles which may never be used on the highway.

5. If your engine is equipped with power steering, remove the four bolts securing the power steering pulley to the crankshaft pulley and set it aside.

6. Disconnect all linkages, fuel lines, and vacuum lines and wiring from the carburetor. Remove the carburetor from the manifold. Identify all hoses for later reassembly.

7. Remove the inlet manifold, cylinder head side cover, and EGR valve. Clean any traces of manifold gasket from the head and block surfaces. Save the attaching hardware for later use.

8. Remove the horizontal water by-pass pipe from the backside of the water pump (inlet manifold side of the engine). Clean gasket surfaces.

9. Drain the oil and remove the oil pan and oil filter.

NOTE: Supercharger rotors have very close operating tolerances between themselves and the rotor housing. Any foreign object introduced through the carburetor flange opening can cause serious damage to the internal components. Keep the protective tape on both the inlet and discharge ports until the last possible moment.

1. Clean the face of the crankshaft drive pulley of all grease and foreign matter. Make sure the four threaded holes are clean, Figure 1. Install the supercharger crank pulley and secure it with four M8x40mm bolts with 5/16 lock washers and 5/16 flat washers. Torque to factory specifications.

2. Remove the four M6 studs from the water pump pulley hub, and replace them with four M6 x 37.5 studs. Apply Loctite 242 to the threads prior to installing the studs.

5. Modify the water by-pass pipe by hack sawing the steel tube flush with the flange. Tap the hole with a ¼-18 NPT pipe tap, and install a ¼ NPT pipe plug. Apply sealant to the threads prior to installing the pipe plug. Install the flange on the engine using a new Toyota gasket or RTV silicone. Secure with the original hardware.

6. Remove the oil pressure sending unit from the tapped hole at the right rear of the block, under the oil filter. Install a 1/8 male street tee. It may be necessary to re-tap the hole in the block to 1/8-27 NPT for proper thread engagement. If this is required, coat the tap with grease to catch as many metal chips as possible. Clean the port thoroughly, and then remove any remaining chips with a magnet. The side port of the “T” should point towards the firewall after it has been fully tightened. Reinstall the oil pressure sending unit in the outer port of the “T” fitting and tighten securely.

7. Install the 1/8 NPT end of the 20” flexible oil pressure line into the side port of the pipe tee.

8. Remove the heater hose fittings from the stock inlet manifold, and install it in the 3/8 NPT port on the underside of the blower manifold. Install one end of the 5/8 ID heater hose on this fitting and clamp securely. Plug the top hole with a 3/8 NPT pipe plug if it is not going to be used.

9. Install a new intake manifold gasket. Install the supercharger inlet manifold using the original manifold hardware, except at the upper front of the manifold which requires two M8x80 hex bolts with 5/16 flat washers. Tighten the bolts uniformly to a final torque of 18 ft-lbs. The steel fuel lines on the fuel pump may require slight bending for proper clearance to the manifold in the manifold water tower area.

10. Install the 22RE thermostat and the thermostat housing. Apply a coating of Loctite 515 to the gasket surfaces before assembly. Secure with original M8 bolts and washers.

11. Install the water temperature gauge sending unit in the tapped hole at the rear of the thermostat housing.

12. Plug the top port of the intake manifold with a 1/8 NPT pipe plug if a vacuum/boost gauge is not installed.

14. Reinstall the radiator, shroud, and fan. Use the fan spacer provided to position the fan forward for drive belt clearance. Use the original nuts and tighten securely.

15. Install the “O” ring in the groove around the intake port of the manifold. A light coating of Permatex #3 or other tacky gasket cement will assure the “O” ring to stay in place during assembly.

19. Reinstall the accessory brackets and accessories. Tension accessory belts according to the factory specifications.

20. Install the carburetor adapter. Apply Loctite 515 to the gasket surfaces. Secure with four ¼-20x1.0 hex bolts with lock washers. Torque to 8 ft-lbs. Check that the blower rotates smoothly. In some cases it may be necessary to add a flat washer under the bolt to prevent interference with the rotor.

21. Fill the engine with oil to the proper level. It is recommended that an oil filter change be performed at this time. A shorter length filter may be needed for proper clearance to the supercharger.

22. Fill the radiator with coolant and check for leaks.

24. Start the engine and let it idle for a minimum of fifteen minutes. This will allow complete lubrication of the supercharger bearings prior to installing the drive belt. Check for oil, fuel and water leaks. Set the ignition timing.

25. Stop the engine and check for oil and water leaks.

26. Install the supercharger drive belt and adjust the tension with the idler pulley adjustment. Visually line up the idler pulley with the belt before tightening the clamp bolt. Make sure there is clearance between the front of the idler arm and the back of the supercharger pulley. The belt is tensioned properly when a 20 lb. force applied mid-span on the tension strand results in a ½ inch deflection, Figure 5.

27. Start the engine. The supercharger is now operational. Check the drive pulleys and belts to make sure they are running true and there is no visible wobble. 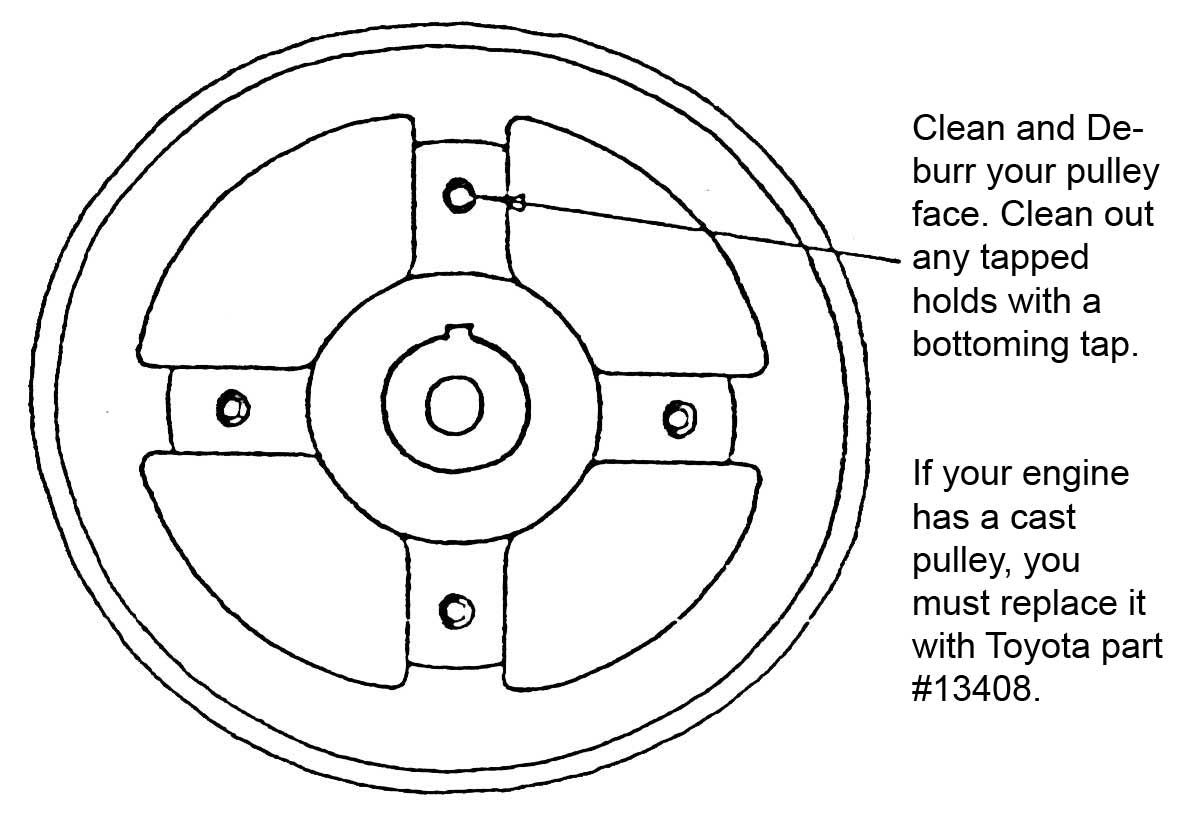 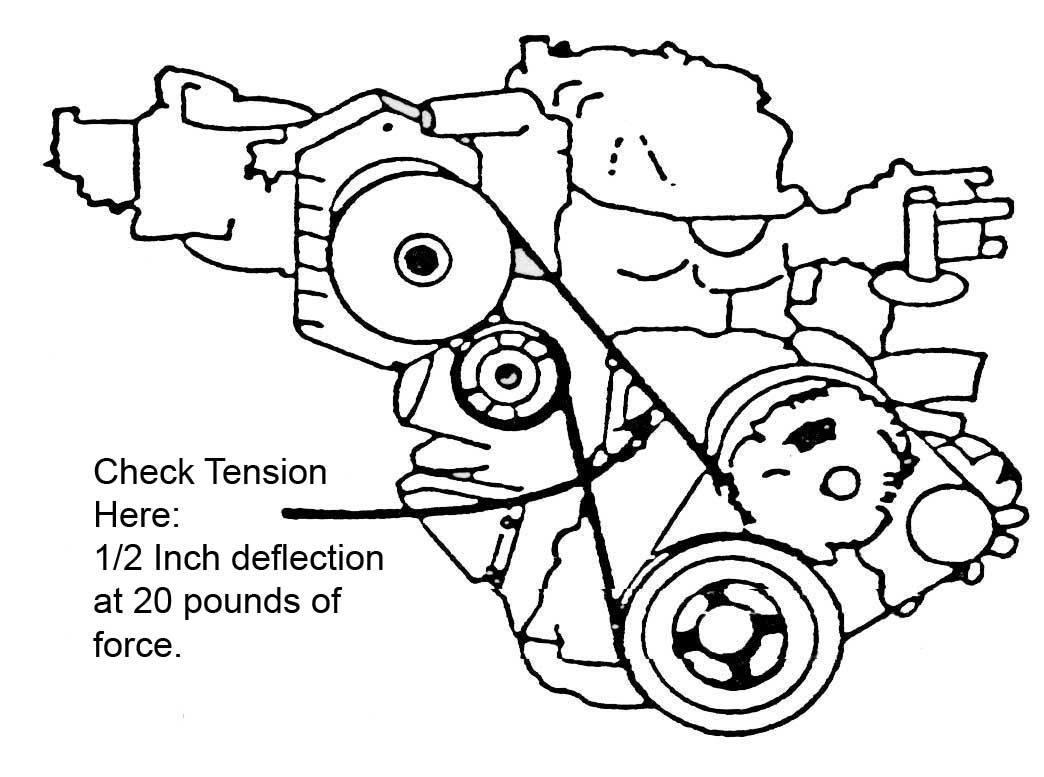