The Toyota 22RE and 3VZ engines are electronically fuel injected. As such they lack a mechanical carburetor and instead split the function of the carburetor into three parts: the air flow meter in the air cleaner box, the throttle body and the fuel injector. The air flow meter uses a flapper vane and temperature sensor to detect the temperature and velocity/flow of the incoming air charge. The throttle body controls the airflow into the engine and the fuel injectors supply the proper amount of fuel to the engine depending upon operating conditions.

The throttle body contains the throttle valve that it operated by the accelerator pedal in the driver's compartment. The valve serves to regulate the amount or air that gets introduced into the engine. The fuel injectors spray atomized fuel into the intake of each cylinder in response to an electrical signal from the engine computer (ECU). One determining factor (among many) for the amount of fuel to inject is based upon the position of the throttle valve, which is determined by the throttle position sensor (TPS). Periodically, the throttle body should be cleaned or checked for a buildup of sludge that may clog the air bypasses, vacuum ports, or prevent the throttle plate from closing to its proper position. This should be checked prior to any adjustment of the TPS. Crankcase vapors are commonly vented into the throttle body for re-introduction into the combustion process (by the Exhaust Gas Recirculation, or EGR, valve). These vapors can leave an oily residue on the back of the throttle pate and allow sludge and dirt to accumulate. The throttle body can easily be cleaned while on the vehicle with a little carburetor cleaner and a cloth or throttle body cleaners. However, for heavy sludge buildup, it should be completely removed, washed in solvent, and dried thoroughly. When doing this, it is important that the TPS should be removed to prevent contamination (a primary cause for failure) and the throttle body-to-plenum gasket replaced. We strongly recommend cleaning your throttle body thoroughly before attempting any adjustment.

The Toyota 22RE engines use a "Linear" throttle position sensor. The sensor basically looks at idle or closed throttle (IDL) and throttle angle opening (VTA). The TPS itself is simply a linear variable resistor that when driven by the ECU produces a linear voltage in a 0-5 volt range, 0 volts being idle and up to 5 volts representing throttle opening angle. Internally, there is also a switch that detects the idle position. Proper adjustment of the TPS is critical for engine performance, fuel economy, and emissions. An improperly adjusted TPS affects many other inputs and outputs from the ECU, many of which would not even logically point to the TPS. Some common symptoms of a bad TPS are; erratic shifting (automatic transmission), inability to adjust timing correctly, poor throttle response, poor fuel economy etc... Many of these running issues can be solved by a simple adjustment! Aside from being out of adjustment, the TPS can just plain wear out or break internally.

After you have properly adjusted the stop screw and the TPS you will need to look at the dash pot. The dash pot is designed to slow down the closing of the throttle to prevent backfiring. It consists of a round air bellow, a spring loaded plunger, and the air vent line that attaches to the fitting at the base of the bellows. The vent line has a check valve in-line and an air filter to keep dirt out. The check valve lets air into the bellows when the throttle opens and extends the plunger. When the throttle closes, the stop screw contacts the plunger and pushes it in. The check valve slows down the air flow which slows down the throttle linkage. To troubleshoot the dash pot make sure the check valve air filter is clean and make sure the check valve is not clogged or stuck open. You should be able to blow air into the bottom freely (throttle opening) but it should be harder to suck air back out of the check valve (throttle closing). You can clean the air filter and check valve with some soapy water, do not use any harsh cleaner like carburetor cleaner. The plunger will also stick sometimes; you can spray a small shot of DRY silicone spray to help keep it moving freely. Lube it then push it in and out fully a few times to work the lubricant down into the plunger. The adjustment procedure for the dash pot is listed below with the TPS adjustment (step 8). NOTE: Make sure you DO NOT contaminate the inside of the sensor.

This procedure can be done with the throttle body installed but is much easier to do out of the vehicle. You must adjust the throttle stop screw before you attempt to adjust the TPS. 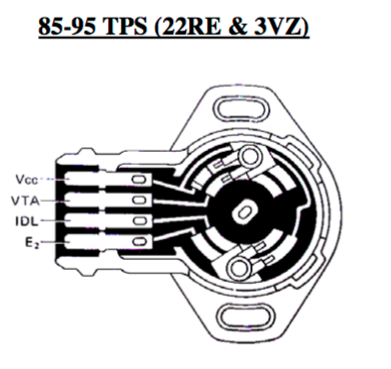 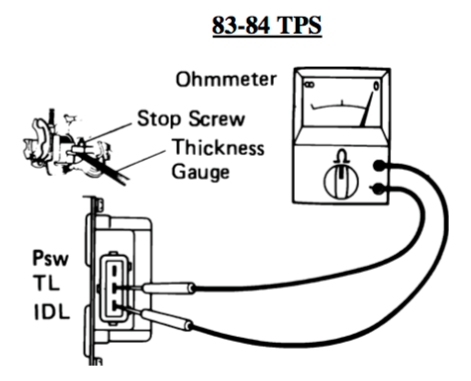 In the above tests, you are actually simulating various throttle positions and rotating the TPS on its base to achieve all the above conditions. Below is an explanation of these tests.

One challenge to adjusting the TPS is that the screws are nearly impossible to access when the unit is in the vehicle. To make the adjustment easier LC Engineering offers a TPS bolt upgrade kit (part #1093082) to replace the stock TPS Phillips head screws with allen head bolts and then use a ball-end allen wrench to loosen and tighten them. The ball headed allen wrench allows you to access the bolts at an angle instead of having to get to them straight on like the stock screws. This kit will also help if you have damaged the stock screw heads trying to loosen them up. This kit contains two M4-0.7 x 16mm socket head bolts, four M4 flat washers and one 3mm ball head allen wrench. The screw length changed around on the stock applications so we supply you with bolts to match the longest stock application and then you can use the supplied washers to shim them as needed for proper length.