Let's first agree, that superchargers and turbochargers are each, in their own way, a type of forced induction. They both do a common task of compressing air allowing the engine to take in a greater amount the air and fuel mixture. Anytime you "burn" more air and fuel, you make more power and torque. Typically, the boost provided by an "off the shelf" kit will provide somewhere between 5 and 8 pounds-per-square-inch. This will, on average, net you a power gain of around 50%. For Every 14.7 pounds of boost pressure you apply to a naturally aspirated engine, you would gain 100%.

Forced induction is one of the biggest ways a professional drag race team can make the serious power that comes from their race engines. World Racing used to run a turbocharged version of our Pro Series Toyota 3RZ four-cylinder engine, and with between 50 and 60 pounds of boost, this Tacoma engine produced over 1,300 HP and a few years later it made over 1,800 HP!

The main difference between a supercharger and turbocharger is in the way in which they turn the compressor wheel and how boost pressure is applied. With the LC Engineering Supercharger system, a belt connected to the crankshaft pulley drives the compressor wheel. This allows the boost to come on instantly and then rises with the engine rpm's. 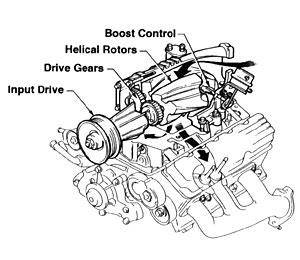 As you can see, both systems have Pro's and Con's. A supercharger will give you instant boost, but the pressure is controlled by the RPM of the engine and the size of the supercharger pulley. This gives you little control over boost pressure after you have already installed the kit. A turbocharger gives you precise control of boost by controlling the amount of exhaust gases directed to the turbine. The waste-gate is controlled by vacuum/boost pressure that is regulated via a boost controller. Boost controllers can be manual or electric. The LC Engineering kits employ a manual controller for ease of installation. Typically, a supercharger is a great choice for low rpm driving such as off-road, rock crawling and mud bogging. They are also great for daily driven street vehicles that seek low boost, and great drivability. For those of you wanting or requiring to put a larger horsepower number to the ground, a turbocharger is probably going to be the right set-up for you.

With either one of the LC Engineering Supercharger or Turbocharger systems, you can easily bolt it right up and make between 60 and 80 horsepower over stock. Add the appropriate engine components internally, and you can be boosting your way to 300+ horsepower on the street or race. We Have Turbocharger Kits for the 22R, 22RE, 2RZ and 3RZ Toyota engines, and each kit features the legendary Garrett turbocharger. Each are offered in low or high boost configurations. If the LC Engineering Supercharger Kit is the direction for you, then look no further. LC Engineering has 22R and 22RE supercharger kits available!